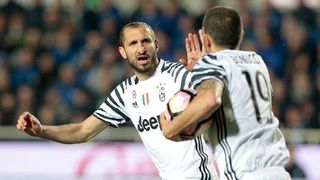 Sunday's win over Crotone saw Juventus crowned Serie A champions for the sixth season in succession.

Although the Turin giants endured a few setbacks throughout the campaign, they proved to be too strong for their main rivals over the course of 2016-17, with Roma and Napoli left well behind.

We take a look at some of the key reasons behind yet another Scudetto for Juventus.

Having lost key figures such as Paul Pogba and Alvaro Morata, Juventus seemingly faced a tough task to continue their Serie A hegemony, but the club's hierarchy ensured Massimiliano Allegri had the squad needed to challenge for the title with some excellent transfer business.

They robbed Napoli of last year's top scorer Gonzalo Higuain to improve their options up front, while they lured Miralem Pjanic away from Roma to add to their midfield, thus strengthening their own squad, while weakening their two main rivals at the same time.

That was not all, though, as Juventus also secured the services of experienced defenders such as Dani Alves and Medhi Benatia, with Juan Cuadrado returning from Chelsea and promising youngster Marko Pjaca finding his way to Turin, too.

Their outstanding defensive record has been one of the main reasons behind Juventus' successes in recent years and that was no different in 2016-17. The Old Lady have conceded a mere 23 times in 35 games, at least nine fewer than any of their rivals.

Veteran goalkeeper Gianluigi Buffon remains one of the best players in the world in his position, while their much-heralded BBC defence consisting of Andrea Barzagli, Leonardo Bonucci and Giorgio Chiellini continues to show just why they are so highly rated.

Additionally, back-ups such as Daniele Rugani and Benatia stepped up to the plate whenever called upon in any of the aforementioned trio's absence as Juve kept an impressive 17 clean sheets.

With the arrival of Higuain, Mandzukic appeared to find himself in a tricky situation in Turin. The Croatia international had netted 10 times in 27 Serie A outings last term, but all signs were pointing toward a role as supersub this season.

The 30-year-old had mainly featured as a targetman throughout the years, but he completely re-invented himself to become a left-winger under Allegri.

The attacker's physicality down the left offered Juventus a way out in difficult moments and he quickly re-established himself as a key figure, having a hand in 12 goals, scoring six himself and creating six more.

There was plenty of skepticism when Juventus announced the appointment of Allegri as Antonio Conte's successor in 2014, but the former AC Milan boss has since silenced all his critics.

His initial success might have been put down to the fact that he inherited a great squad, but the loss of players such as Andrea Pirlo, Arturo Vidal, Carlos Tevez and the aforementioned Morata and Pogba has not prevented Allegri from winning title after title.

Allegri has proven his tactical nous in Europe - guiding Juve to two Champions League finals in three years - and has also shown domestically that he is capable of outmanoeuvring any opponent, either using a 4-2-3-1 or a 3-4-3 or 3-5-2 formation depending on the opposition.

Juventus somewhat surprisingly lost to Inter and AC Milan in the first half of the season, but those defeats hurt little due to the Milan sides' inability to challenge for top honours.

When it really mattered, though, the Bianconeri made sure they were right on top of their game.

Juventus saw off last year's runners-up Napoli 2-1 in October courtesy of a Higuain strike, before defeating Roma 1-0 in December following another winner from the Argentine.

A 1-1 draw at Napoli in April all but ended the Stadio San Paolo side's title hopes, with Juve sealing the title away against Roma on Sunday.