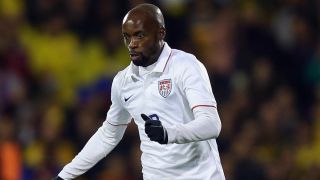 United States winger DaMarcus Beasley said he is ready to make his international return as the defending champions prepare for their CONCACAF Gold Cup quarter-final against Cuba on Sunday.

It is eight months since Beasley announced his retirement from international duty to focus on his family and club career with MLS outfit Houston Dynamo.

The 33-year-old claimed it was coach Jurgen Klinsmann, who approached him last month during USA's friendlies and said it was an offer he could not refuse.

"He [Klinsmann] didn't have to keep asking me," Beasley told a media conference.

"When your national team calls, you can't turn that down."

The 121-cap veteran added: "I want to challenge myself, like I always have my whole career.

"Putting back on the red, white and blue shirt is a great feeling."

Klinsmann is adamant Beasley will give the side an advantage come Sunday.

"He brings a lot of experience into this group, and he's hungry- he's still as hungry as day one [of] his career," Klinsmann said.

"It gives us a couple of different options on how to put pieces together."