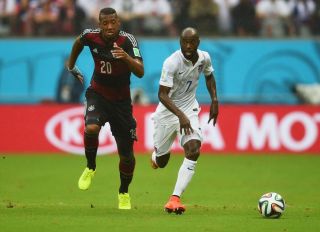 Jurgen Klinsmann's men were beaten 1-0 by Germany in Recife on Thursday, but a better goal difference than Portugal's saw the USA finish second in Group G.

Beasley, deployed at left-back in Brazil, said the unpredictable nature of the tournament gave his team hope.

"Now that we're in to the knockout rounds it’s won and done," he told FIFA.com.

"We want to take it to the next level now. You’re getting a lot of weird results in this cup. Anything can happen."

A natural winger, Beasley has been used as cover in a problem position at left-back for Klinsmann.

He said his attacking instincts were hard to contain, but knows his first job is to ensure his defence is covered.

"My eyes still get big when I get near the box, but my first job is staying back and protecting the goal. It’s cool to throw yourself into a tackle every once in a while though."

The USA face Belgium in Salvador on Tuesday in the round of 16.