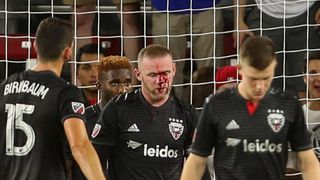 The ex-England captain got off the mark in MLS by firing through the legs of former Manchester United team-mate Tim Howard as DC beat Colorado Rapids 2-1 on Saturday.

Rooney's joy was tempered by a challenge that left the striker bloodied on his fourth appearance for DC since leaving Everton.

And the 32-year-old, who captained DC for the first time, confirmed the extent of his facial injury in a social media post.

"And a broken nose and five stitches."

Delighted to score my first goal for last night and more importantly a big 3 points at    July 29, 2018