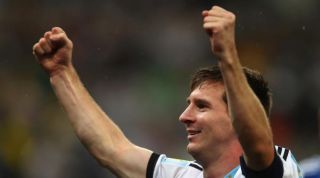 Messi's Argentina will tackle a Germany side buoyed by their 7-1 demolition of hosts Brazil at the Maracana on Sunday.

As ever, much focus will be on the South American side's skipper, who is aiming to cement his legacy by winning football's biggest prize.

Argentina have not lifted the trophy since 1986 when Diego Maradona - so often compared to Messi - led the way.

And Beckham believes Messi is capable of following in the footsteps of his illustrious predecessor.

"He gives people so much pleasure with the way he plays and what makes him special is he plays as a team-mate as well, a good team player.

"He's got great individual skill, but winning means everything to him.

"If other team-mates score goals he's the first one there to celebrate with them and I think that says a lot about him.

"Playing for Argentina, I'm sure there's a certain amount of pressure, but going as far as they've gone is incredible.

"It means so much to him, his family and everyone else around the world, the fact Messi's going to be playing on this stage."