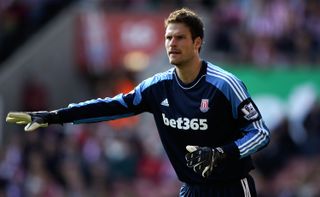 Mark Hughes' side made a strong start to the Premier League campaign with only one defeat in their opening four matches, however, they have not won since the end of August.

Stoke have not found the back of the net in their last three games and have only scored four goals so far this season – the lowest in the division.

They ended a run of three consecutive defeats with a goalless draw against West Brom last weekend and Begovic is convinced a win is just around the corner.

"The lads would love for a ball to hit the back of the net via a deflection off a defender's backside or something, because we are doing everything bar score at the moment.

"It is frustrating because we are putting in performances that warrant goals, and better results, but as long as we keep pushing and keep asking the questions I am certain that the goals will soon start to flow.

"We are all plugging away, and we are still getting used to the new way that we are playing and of course, we are still integrating a couple of the new lads into the team at the moment.

"Once everything clicks I am convinced that we will be a force in the Premier League, but we all must remember that we are at this moment in time, a work in progress."

Stoke will look to collect three points when they face Manchester United at Old Trafford this weekend, but they have never won there in the Premier League.