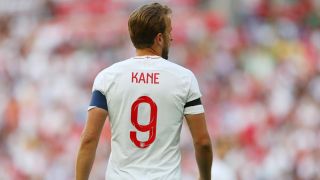 Belgium goalkeeper Thibaut Courtois believes captain Harry Kane will be the biggest threat to his team when they face England at the World Cup in Russia.

Courtois and Belgium will meet Group G rivals England on June 28 in their final group game of the showpiece tournament.

Kane scored 30 Premier League goals for Tottenham in 2017-18 and it is the England striker's consistency that makes Courtois wary.

"England have a team with a lot of individual talent, you'll have to watch out for several players," the Chelsea keeper said.

"But the one who scores almost 30 goals every year is Harry Kane. He is the most dangerous."

Courtois' Belgium host Egypt in a friendly on Wednesday and the reported Real Madrid target hopes they can provide a similar test to what they will face against Tunisia at the World Cup, despite being without injured talisman Mohamed Salah.

"It's a shame we can't play against the best team [of Egypt] because they will play without their best player," he said.

"I think Egypt has a good team. Obviously, with or without Salah, it's different.

"But it will be a good game and a good test, hopefully a match similar to that against Tunisia."