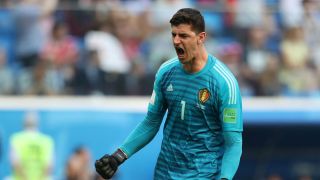 Thibaut Courtois has won the Golden Glove award for the best goalkeeper at the 2018 World Cup.

Belgium goalkeeper Courtois was influential in his side's run to the semi-finals as his country achieved their best finish in the tournament, coming third.

The Chelsea man kept clean sheets against Panama and England twice, while also impressing in a win over Brazil, to edge out finalists Hugo Lloris and Danijel Subasic.

After it was confirmed he had won the award following the final, Courtois posted on Twitter: "One of the biggest individual honors you can get as a goalkeeper! So proud of this!"

One of the biggest individual honors you can get as a goalkeeper! So proud of this! #1 July 15, 2018

The prize is given to the keeper deemed by FIFA's Technical Study Group to have been the most impressive in the tournament.