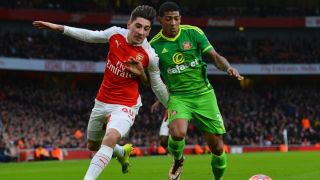 Arsene Wenger hailed Hector Bellerin as one of the best full-backs in England after his performance in Arsenal's 3-1 FA Cup win over Sunderland.

The holders responded to Jeremain Lens' early goal to seal their place in the fourth round thanks to strikes from Joel Campbell, Aaron Ramsey and Olivier Giroud.

Bellerin set up both Ramsey and Giroud's second-half goals to cap another fine performance on the Gunners' right flank and Wenger could not hide his admiration for the former Barcelona youngster.

"In the last 20 minutes, he created a goal chance every time he went up there," Wenger said. "Look at his defensive and offensive numbers. He's only 20 years old so there's a lot more to come from him. Of course he's one of the best in the country.

"We had to work but that's normal when you play a Premier League team. I thought we had a very convincing second half after being a bit shocked in the first half and taking time to find our game."

France international Mathieu Debuchy has been linked with a January exit after losing his spot in the side to Bellerin and Wenger admitted it was "a possibility" that he could allow the full-back, wanted by Aston Villa, to leave.

Wenger also praised the performance of young forward Alex Iwobi, who impressed in his role as Mesut Ozil's replacement behind Giroud.

"I like the timing of his passes. In the middle of the park that is a vital quality. He plays forward, he's not scared to take people on. That's not easy for a young boy," he said.

The Frenchman could become the first manager to lift the FA Cup seven times should Arsenal win it for a third year in a row and, despite Premier League and Champions League commitments, he is keen to challenge for another Wembley triumph.

"We have done that [retained the cup] twice," he added. "We take the competition with a desire to do well in it and to win it. It's a long way - in the cup you need a long run."