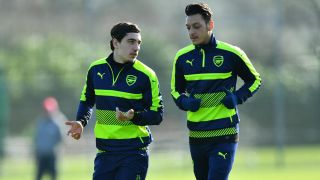 Hector Bellerin has praised Arsenal team-mate Mesut Ozil for speaking out about the issues that prompted his international retirement.

Ozil ended his Germany career on Sunday, confirming his decision in a series of social media statements that criticised the media and German FA president Reinhard Grindel.

The playmaker, who has been at the centre of a storm surrounding the photo he took with Turkish president Recep Tayyip Erdogan in May, claimed he was made a scapegoat for his country's poor World Cup performance due to his Turkish roots.

His comments received support from Spanish full-back Bellerin, who posted a message of solidarity on Twitter.

"Surreal that someone who has done so much for his country on and off the pitch has been treated with such disrespect," Bellerin wrote.

"Well done Mesut Ozil for standing up to this behaviour!"

Bayern Munich defender Jerome Boateng, who debuted for Germany in the same year as Ozil, shared a photo of the two together, adding: "It was a pleasure Abi", with 'Abi' the Turkish word for brother.

Ozil earned 92 caps for Germany and was part of Joachim Low's side who won the World Cup in 2014.