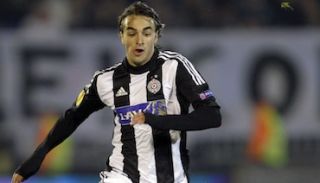 The Lisbon club said in a statement on its website it had reached a deal with the coveted winger, who had also been linked in the media with Premier League club Chelsea.

The statement included an interview with the young Serb and a photo of him smiling and wearing a Benfica shirt. The Portuguese club gave no financial details about the deal.

"Benfica play very attacking football that fits nicely with my characteristics," said Markovic, who is known for his excellent technical ability and pace.

"I come from a winning team and this style of play, always looking for goals and victories, fits me."

He said he wanted to win titles with the Lisbon club, who, despite many impressive displays, endured a hugely disappointing end of season where they lost the championship, domestic cup final and Europa League final in just a few weeks.

"I know we will play in the Champions League so I am very motivated," Markovic said, adding he had already asked for tips from compatriot Nemanja Matic, who was Benfica's player of the season.

"He told me that Benfica is a very organised club with a lot of fans and tradition."