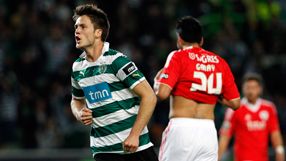 Benfica's painful defeat means they lag four points behind leaders Porto in second place with only four matches to go. Porto muscled out a 1-0 win at Braga on Saturday.

The visitors were left reeling after Dutch striker van Wolfswinkel coolly side-footed from the penalty spot in the 18th minute.

Apart from the penalty, Sporting and Benfica had virtually no chances in a lukewarm first half with the hosts happy to sit back and slow the pace down after the early lead.

Benfica were unrecognisable in attack, lacking intensity and speed.

Sporting, fourth in the league, should have extended their lead after half time but van Wolfswinkel missed two easy chances and Russian midfielder Marat Izmailov hit the woodwork from distance.