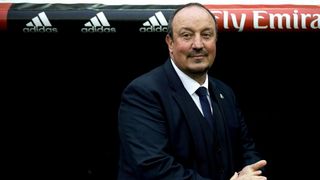 Benitez is set for a hero's welcome from the home fans on Sunday, with the ex-Napoli boss having won two league titles and the UEFA Cup during his time with the club between 2001 and 2004.

The 55-year-old remains under intense pressure at Madrid, however, with some reports stating he will be sacked should Valencia take all three points, but Neville insists he has earned a good reception at his old club.

"I think Rafa deserves the gratitude he'll get for what he's done for this club. It's always right for a previous player or manager to get that respect," said the former Manchester United captain.

"[The pressure] is none of my business. When you manage a top club it's part and parcel of what you have to deal with. He knows the game inside out, he's experienced.

"It's right the fans show gratitude to the work he did here but you forget about that when the match starts."

The 2000 Champions League final showdown and Valencia's title triumphs in 2002 and 2004 have helped to fuel a burgeoning rivalry between the two sides in recent seasons.

Neville himself is looking for his first win as Valencia boss but, while he acknowledges that supporters will be fired up for the encounter, he has called on his players to use their heads in order to secure three points.

"I'm aware of the rivalry. This is football, it's the most important aspect," he said. "These rivalries make you fall in love with the game. The fans want passion, spirit, fight, they want to see the opposition destroyed.

"But on the football side of things you think about it without emotion. We have to concentrate, be professional, do our job.

"The players have to let the fans get involved with the emotion."

Neville is also relishing the prospect of masterminding a way to stop former team-mate Cristiano Ronaldo.

"I played with him at United. I have great memories of him. But now it's different, I'm the coach of the opposition and I have to see how we stop him," he added.

"I've talked a lot about him in the last four or five years. We have to minimise the virtues of Madrid and maximise our own."