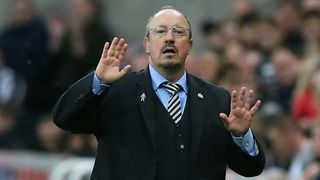 The hosts were second best for large periods and had to wait until the 71st minute for their first shot on target – Mohamed Diame testing Julian Speroni from distance.

Benitez was impressed with the Eagles' organisation and knew his side would have to be patient to break down a side buoyed by their first Premier League win of the season over Chelsea last weekend.

"It is important now to get three points in a difficult game," he told the BBC.

"The main thing is we keep pushing and winning games.

"We have a very clear idea and have to take one game at a time. At the moment we are in a good position."

Roy Hodgson, meanwhile, was full of praise for his side, who could have grabbed a late goal just before Merino's winner, but Patrick van Aanholt agonisingly failed to connect with Ruben Loftus-Cheek's low cross.

The result leaves Palace rooted to the bottom of the Premier League with just three points from their opening nine games, but Hodgson has no complaints over the quality or effort displayed by his team.

"There were some very good performances from us in particular," he explained. "The quality of our play was very good.

"We need more than a goal to take one point and set plays are always a problem.

"I cannot criticise our performance. From the first minute to the last it was everything I expected and under normal circumstances would have got us a result."

RH: No point feeling hard done by. Football's like that, you don't always get what you deserve.October 21, 2017