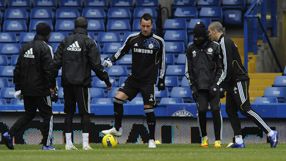 Benitez, who has made it clear that he is keen to continue his spell at Stamford Bridge beyond the end of the season, is full of praise and encouragement for the skipper to one day take charge of the European champions.

"John has the good qualities to become a manager," stated the under-fire Spaniard.

"I have had players in the past who have been big names, but they did not understand the game like him. He likes talking about tactics.

"He seems as though he understands, with the way he treats the young players and takes care of them."

Terry, who has spent two months on the sidelines with a knee injury, is coming towards the end of his playing career at the age of 32 and looks to have one eye on management.

After getting a full 90 minutes under his belt against Brentford in the FA Cup, Terry was backed by Benitez to revive his side's flagging form as Chelsea look to secure an automatic Champions League spot.

"John is a great player and a great leader," said Benitez. "Maybe in some games we lacked something like this recently, but John can now be a key player for us for the rest of the season."

Much was made of Terry's involvement when Roberto Di Matteo was at the helm, along with role of the senior players, when Andre Villas-Boas was sacked last season.

Benitez will have to ensure that he keeps Terry onside to regain form and make both owner Roman Abramovich and the Chelsea faithful believe he is the right man for the job after a disappointing winter.