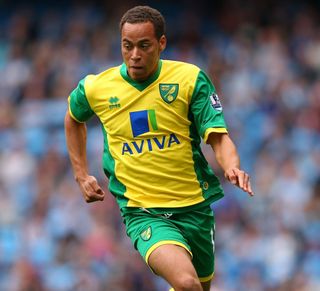 Winger Bennett played the full 90 minutes of Norwich's 2-2 draw with Everton on the opening day of the Premier League season, but then suffered a serious knee injury in training and has not featured since.

However, after four matches with the club's Under-21 team, the 25-year-old feels ready to return.

Norwich visit Old Trafford for a crucial clash on Saturday and Bennett is desperate to feature against Manchester United.

"I've been asked to play in the (Under-21) game (at Wolves), I've come through that fine, my knee feels brilliant, I feel really fit but these decisions are not up to me.

"I'm ready, the manager knows I'm ready now as well, so it's just a case of biding my time, training well and who knows what could happen then but I'm just grateful to be back out on a football pitch."

Bennett said he has been in regular contact with manager Neil Adams, who has asked the former Brighton and Hove Albion man to keep working on his fitness.

And he is confident Norwich can avoid relegation despite the club sitting just two points above the drop zone with fixtures against Manchester United, Chelsea and Arsenal to come.

"I've spoken to Neil quite regularly and he's just told me to keep getting my fitness up and get some minutes in and then it's up to me really," he added.

"I know where I'm at, he knows where I'm at as well, and to get (another) 90 minutes under my belt I'd like to think is good for me and good for Neil as well to have another body available that he can maybe call on if needs be.

"We've got a fantastic squad of 25 players and any given day anyone can play.

"Neil is the manager now and he's got the full support of every single person and hopefully we can do what's asked of us and stay in the Premier League."