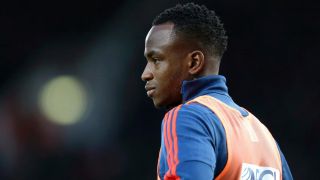 West Brom captain Darren Fletcher urged Saido Berahino to learn from Stephane Sessegnon and work his way back into the first team.

Sessegnon is back in Tony Pulis' plans and scored in his side's 2-1 win over Stoke City on Saturday, months after upsetting his manager by taking a taxi from Newcastle after being left out of the matchday squad.

Berahino needs a similar turnaround at the club, among the substitutes for the ninth straight Premier League game.

"Saido is here and a part of a squad and is well-liked," Fletcher said.

"Sess is an example to everyone. The way I always treated it when I wasn't in the team was I took it personally and trained as hard as I could and tried to show the manager and use it as a motivation and a fuel.

"Saido is a great kid who is not in the team right now but he's got to keep his head down because he's a great talent and he's got a number of years to play.

"This might be a good learning experience for him."

Sessegnon's goal at The Hawthorns was cancelled out by Jonathan Walters before Jonny Evans scored a late winner for West Brom.

Fletcher hailed Evans, a former team-mate of his at Manchester United, and said he was surprised the 28-year-old was at West Brom.

"We were very lucky to get Jonny in the first place because he's a top, top player," Fletcher said.

"I was surprised none of the so-called top-four clubs were looking at him because he is top class."