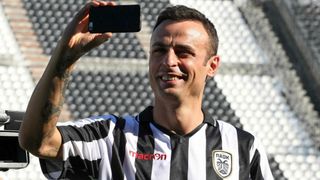 PAOK forward Dimitar Berbatov has explained why he was sent-off in Sunday's 1-0 derby defeat against rivals AEK Athens by interviewing himself via Facebook.

Ronald Vargas scored the only goal of the game as AEK made it four successive wins in the Greek Super League.

Berbatov was sent-off in the closing stages of the game after coming on as a second-half substitute with PAOK searching for an equaliser.

The 34-year-old hit out at an opponent with an elbow after he claimed to be held in the box and was promptly shown a red card.

"[A] player from AEK was holding and preventing me from positioning myself better in the box and this, and the fact, I was angry and nervous, make me hit him," Berbatov replied to "journalist Berbatov" on his official Facebook page.

"This is not something that resonates well with the way I see and play football, but everyone can lose his balance and do something stupid during a game.

"I was not playing and I could do nothing to help. This was a derby and I come here to play exactly in [these] kind of games, where my quality and experience can help the team, and not for me to stay on the bench and do nothing. But the opposite happened.

"When I don’t play, I can’t be happy. The problem is that, in this case I took it out on the colleague from the other team. I am not one of [these] players looking for a conflict, this is a well-known fact, but in this case the opposite happened, for which I am sorry.

"Now I carry the consequences from my action. Three games ban. And because of this I say sorry to the team!"

The former Bulgaria international also took the opportunity to ask himself to respond to media claims that he did not want to play for PAOK anymore.

"This is why I am giving interview to you, and not to people who are coming up with stupid things like this," he said.

"This is not true, and with this kind of talks some people are trying to harm the team. Or for people to say 'Look at him, he don’t wanna play anymore and this is why he get a red card', which of course is not true.

"And the truth is this: I still feel joy when I play football. I want to play. When this is not happening I am angry and disappointed.

"There is no way to feel joy from the fact that I am not playing, and they are paying me good money amid all that is happening in Greece.

"And I can help PAOK on the pitch, with my football quality I have and demonstrated through my career.

"With me, if the passion for football decreases and I stop to get angry, stop yelling and gesticulate on the pitch, then I don’t care for the football or the team I am playing for. The passion is gone.

"But this is not the case yet. PAOK is my team now, and I fight for my team, even if this means a red card sometimes."