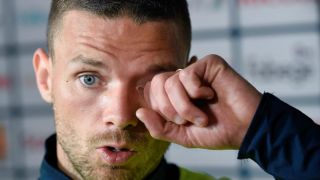 Marcus Berg has played down a row that led to Sweden training behind closed doors on Saturday.

Striker John Guidetti and midfielder Albin Ekdal reportedly clashed during a practice match, leading to the media being locked out of a scheduled open training session.

Sweden face Ireland in their opening Euro 2016 game in Paris on Monday and Berg insisted it was not unusual for players to get fired up during training.

"It happens in the club side every day," the Panathinaikos forward said.

"It doesn't happen in the national team that often, but it does happen occasionally in small-sided games.

"There are bad losers - and bad winners who mock them. Some take it harder than others."

Sweden's press officer Niklas Bodell insisted the decision to close the training session to the media was because coach Erik Hamren wanted to privately work on tactical details for the Ireland match.