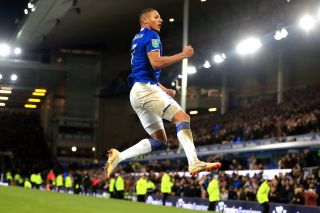 Brazil international Richarlison arrived at Goodison Park from Watford as a £40million winger two summers ago but has increasingly been utilised as a central striker and, as a result, has scored 10 league goals this season.

Bernard believes his compatriot’s development is far from complete and will only benefit from getting into the penalty area more often.

“Richi is capable of adapting to any scenario during a match,” the Brazilian told evertontv.

“He’s the type of player who’s really aggressive in the box. He’s fearless and not scared of putting himself about or taking a whack.

“Whatever is happening, the important thing for him is putting the ball in the back of the net.

“This makes him who he is, a player with a massive presence in the box.

“He is still developing. When you look at him he’s still so young to be doing what he is in the Premier League.

“I am certain he will mature and become an even better player, not just in the way he plays but also in the way he understands and reads the game.”

Bernard played some of his professional career in front of crowds as low as 3,000 but he admits he is not prepared for what they will encounter when Goodison Park hosts the 236th Merseyside derby on Sunday night.

Due to conflict in Ukraine, the winger’s previous club Shakhtar Donetsk were forced to relocate more than 600 miles west to Lviv in 2014 and as a result their home crowds were hugely diminished in a 35,000-capacity arena.

The Everton squad played an in-house practice game in an empty Goodison last week but Bernard accepts that will not properly prepare them for the visit of their near-neighbours and champions-elect Liverpool.

“It’s difficult playing in an empty stadium as we’re used to having a full crowd,” he added.

“Particularly in England, you look at the games in the second and third divisions and the stadiums are all full.

“I experienced games like this on numerous occasions and it is strange but it’s been a long time and it will be hard after playing at a full Goodison Park every game to get used to it being completely empty.

“I don’t think my experience (in Ukraine) will affect me either positively or negatively, your performance in this type of game depends a lot on your concentration levels.”