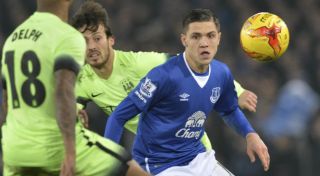 Muhamed Besic has quickly established himself as a fan-favourite at Goodison Park for his hard-tackling style, but he wants to be remembered for more than just his graft.

The 23-year-old midfielder arrived at Goodison Park in July 2014, and while he has only played 28 league games for the club in that time, he is beginning to see more minutes under manager Roberto Martinez since returning from a hamstring injury on Boxing Day.

And while Besic's love for the tackle has endeared him to Everton supporters, he believes he is more than just a midfield grunt.

"I think the fans like me because I like to tackle. I am really pleased with that, it is always good to have a good relationship with the supporters," the Bosnian was quoted as saying in the Liverpool Echo.

"I like tackling but in the last game against Chelsea for example I did not tackle, not once. So I can play also without it that game was difficult to tackle in. I can do both.

"I’m happy when the fans like me because I can tackle. For me, it’s not important if they know I have technical ability. I know that I am good technically, so that’s it."

Besic said that while he enjoyed the non-stop noise of the crowds in Germany - where he played youth football for Hamburg before making three senior league appearances - he preferred the roar of the crowd after a hard challenge.

"The fans here are different. Over there [in Germany] they sing songs for 90 minutes but over here one minute it is calmer, then you make a tackle and the crowd lift up. I like it more than in Germany," he said.

More than anything, however, Besic is just happy to be back playing football after a number of injuries that hampered his first half of the season, saying: "I worked a lot. I was patient and now I want to stay there. It is normal. I want to play as many games as I can.

"It's good to be passionate but Roberto Martinez's teaches me to be a little more calm and to focus on football and I have learned a lot.

"That is what I mean. It is a bit difficult. That is why I needed a bit of time.

"I don't want to see another red card - but you never know. I feel in control but I still need a bit more control.

"I am in a good place now. I don't think I will ever get sent off again for throwing chewing gum at an opponent.

"In Germany I would get more yellow cards, that’s for sure. I like England a lot. That is why I choose England."