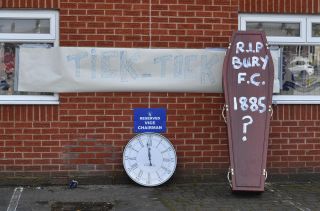 A judge has dismissed another bid to wind up Bury Football Club.

Judge Sally Barber analysed the latest stage in Bury’s case at an Insolvency and Companies Court hearing in London on Wednesday.

She had dismissed an earlier winding-up application in mid-December.

Both applications related to tax debts and were made by HM Revenue and Customs officials.

The latest winding-up application had been lodged shortly before Christmas and tax officials had said more than £50,000 was owed, Judge Barber heard.

She dismissed the application after a lawyer representing HM Revenue and Customs told her that all but around £2,500 had been paid.

Judge Barber had also dismissed the earlier winding-up petition after being told that money had been paid.

The amount owed during those earlier proceedings did not emerge at court hearings.

But English Football League officials expelled the club in August after bosses failed to show they could pay debts.