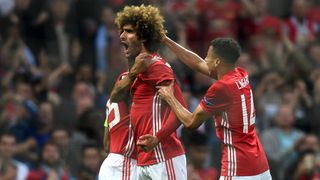 It's been five months to the day since Jose Mourinho launched his public support of Marouane Fellaini.

Jeered by Manchester United fans following his introduction in the 1-0 win over Tottenham at Old Trafford, just a week after conceding a late penalty that denied his side a win at Everton, Fellaini's future was starting to look bleak – and not for the first time.

But Mourinho, who has hardly been shy of haranguing his under-performing stars away from closed doors this year, was adamant. "He is a player and a person I like and the person is more important," he said. "He will always have my trust and protection."

On Thursday, he repaid that trust big time.

Fellaini may not have been playing were it not for the three-game domestic ban he picked up for a mindless headbutt on Sergio Aguero in the Manchester derby. As it was, he was one of the more rested members of United’s first team against Celta Vigo for the second leg of their Europa League semi-final.

has now scored in the semi-finals of the FA Cup, the EFL Cup and the Europa League for .Some record! May 11, 2017

Those fresh, long legs proved critical for United. Bursting from deep, he raced to meet Marcus Rashford's excellent cross and power a header past Sergio Alvarez in the Celta goal, who could only parry the ball into the net.

He was otherwise as busy and bustling as ever in midfield, winning a number of pressure-easing free-kicks and setting up Henrikh Mkhitaryan for a good chance. Only a far better save from Alvarez stopped him doubling his tally later in the second half.

Fellaini has rarely looked like a player to restore calm to the team since his £27.5million move from Everton nearly four years ago, but he had the home fans on their feet and breathing a big sigh of relief here, as he first pointed to the name on his shirt that brought boos in December before fist-pumping with gusto.

Not many will remember – though Mourinho surely does – that he's forming a habit of doing this on the big occasion. He has scored goals in the semi-finals of the Europa League, EFL Cup and FA Cup for United. They've won two of the three trophies in the last year and are a game away from a clean sweep.

It was a nervy night for United. Aside from a spell of 15 minutes or so after the goal, when Rashford and Mkhitaryan had chances to effectively end the tie, they produced an error-strewn display against a supremely confident Celta side. Sergio Romero, again preferred in Europe to David de Gea, made good saves to deny Iago Aspas and Pablo Hernandez, while Daniel Wass headed a clear chance wide.

It all threatened to go awry in the dying minutes as Facundo Roncaglia scored and he and Eric Bailly were sent off after a shoving match in the centre-circle. Bailly had been excellent throughout and he will be a huge loss in the final. He was in these last few minutes, that's for sure, as Celta twice created openings to win the tie only to opt for a final pass rather than go for goal.

United fans largely answered Mourinho's call to be loud and were deafening at full-time, but they will have wanted more to shout about. This was another 90 minutes of toil at the Theatre of Dreams and a performance that is unlikely to have Ajax feeling frantic ahead of the final in Stockholm.

But they survived. The Champions League and a third trophy of the season is a step closer. And it was the big Belgian who produced the big moment, just as Mourinho promised he would.