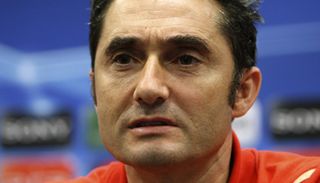 Valverde, 49, will be presented on Friday and replaces Argentine Marcelo Bielsa, who was not offered a contract extension after two years at the helm.

Former Bilbao player Valverde left Valencia earlier this month after replacing Mauricio Pellegrino for the second half of last season, but he turned down the chance to continue with the east-coast club.

Valverde returns for a second spell at Bilbao where, after working his way up through the youth academy, he coached the first team for two seasons between 2003-05.

In his first year he guided them to fifth in La Liga and into the UEFA Cup, and the second year they finished ninth and reached the King's Cup semi-finals.

He took Espanyol to the 2007 UEFA Cup final and won three league titles and two cups with Greek side Olympiakos Piraeus.

An unsuccessful spell with Villarreal, in the 2009/10 campaign, interrupted his three seasons with Olympiakos before he left Greece in 2012.