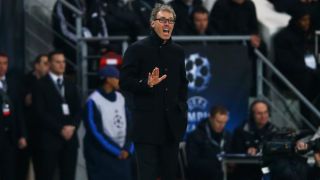 Blanc's men trailed at the Parc des Princes courtesy of Branislav Ivanovic's first-half header, but Edinson Cavani nodded in an equaliser shortly after the interval as the first leg of their last 16 tie ended deadlocked.

The home side's boss in the French capital said he was wary of shipping what could prove to be a vital away goal - having exited the illustrious tournament on the tie-breaking rule in previous seasons.

Blanc said more work into the likes of Ivanovic was necessary to completely quell Jose Mourinho's side.

"We prepared for this game quite well and anticipated things they might do," Blanc said, as reported by UEFA's official website.

"Everything happened almost as we had planned, which is satisfying. It was a pleasure watching this game.

"We played well, almost a perfect game. Except for one thing, we did exactly what we had planned. It's a bit frustrating.

"We have to admit this Chelsea side came here to score an away goal and got it. They scored thanks to a move involving only defenders when we were focused on players like Eden Hazard and Willian. All their players must be focused on equally.

"We showed our qualities tonight. I'm proud of my players. Look at our last campaigns: we went out to Chelsea and Barcelona on away goals.

"It's the reason why I elected to field David Luiz as a midfielder."

Blanc said one goal would be decisive for the return leg at Stamford Bridge on March 11.

Having met with opposite number Mourinho in the lead up to their clash in Paris, Blanc said the Portuguese boss was once again playing the mind games he is famous for.

"Jose and I spoke before and after the game. We wished each other luck, but when he says we can win the four competitions we are in, I know he is being a bit ironic," Blanc said.

"He knows there is the Champions League among those competitions and he wants to win that instead of us.

"We'll keep attacking in the return leg but we'll do it smartly.

"One goal will be enough if we defend well."