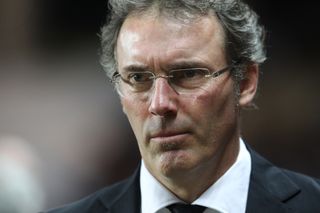 Blanc will be in the dugout for his side's Champions League last 16 first-leg clash at Bayer Leverkusen next Tuesday, having appealed UEFA's initial verdict of being guilty of "improper conduct for a late kick-off".

The Frenchman's offence came against Benfica in Lisbon on December 10, with UEFA's Control and Disciplinary Body also fining PSG €10,000.

However, after appeal, Blanc's one-match sanction is to be suspended for a year, although the financial penalty will stand.

A UEFA statement read: "The UEFA Appeals Body today announced its decision following the appeal lodged by Paris Saint-Germain and head coach Laurent Blanc against the decision taken by the UEFA Control and Disciplinary Body on 30 January 2014.

"The UEFA Appeals Body carefully analysed the statements, documents and facts of the case submitted by Paris and Laurent Blanc, as well as the statements and documents submitted by the UEFA Disciplinary Inspector appointed to this case, and accepted the joint proposal to give the coach a one-match ban with a probationary period of one year, and a fine of €10,000 (£8,200).

"This decision is final and therefore not subject to appeal."