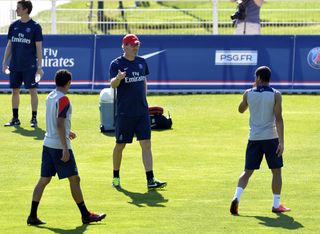 The French champions were held to a 1-1 draw at Montpellier in their opening Ligue 1 fixture of the season and will be hoping to atone for that slip-up when they host Ajaccio on Sunday.

But Blanc, who replaced Carlo Ancelotti as PSG boss in June, is unfazed by the scrutiny of managing the wealthy club.

"There's a lot of pressure on the shoulders of PSG's coach as it's one of the big French clubs but hey, I've asked for it, so I just have to accept it," Blanc said on Friday.

"I'm even happy to live these moments.

"Let's not forget that a few months ago I was jobless.

"Then obviously I had no pressure. I was sitting at home, I was chilling.

"Pressure is part of our life as a manager. Yeah, it's hard but when you sign for a job like this one, you know what to expect and you have to enjoy it."

New signing Edinson Cavani could be in line for his first Ligue 1 start after appearing from the bench last week.

PSG goalkeeper Salvatore Sirigu feels the Uruguayan could be just what the team need.

"Cavani is a modern forward player. He gives a lot to the team. He's very fit. He can be a striker as well as a good defender," Sirigu said.

"He's able to defend very well and applies a lot of pressure. He's always ready to give a hand to his team-mates.

"I think that's what we need now; forward players who are ready to sacrifice themselves for their team and team-mates."