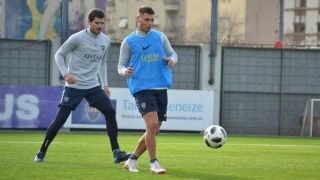 Boca Juniors have confirmed the signing of Mauro Zarate days after the attacker's brother accused him of betrayal for turning his back on Velez Sarsfield.

Zarate joined Velez, the team with whom he took his first steps in professional football, on loan in January and had reportedly verbally agreed to sign on a permanent basis following his release from Watford.

But after posting a photo on social media of himself wearing the shirt of his boyhood club, the former Lazio and West Ham forward unexpectedly reneged on the deal and joined the Superliga champions.

His older brother Rolando – who, like Zarate and his two other siblings Ariel and Sergio, was a product of the Velez academy – told Fox Sports Radio this week he felt "betrayed" as "Mauro stuck a knife in my back".

Zarate defended his character upon Boca's announcement of his signing on Friday.

"The Boca fans know me as a player," the 31-year-old told the club's official website. "Maturity always helps and I have improved many things.

"Before, perhaps because I was young or had little experience, I made mistakes. They are things I do not repeat now."

Zarate's addition to a squad which already includes Carlos Tevez and Fernando Gago bolsters Boca's bid to win their first Copa Libertadores since 2007.