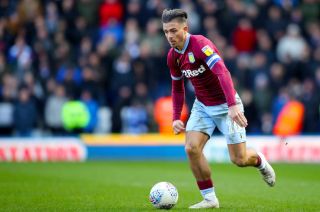 Jack Grealish’s sixth goal of the campaign followed by Tammy Abraham’s 24th gave Dean Smith’s in-form side a 2-0 win to match an achievement previously established in 1910.

Wanderers, who preserved their second-tier status on the final day of last season, had new owner Laurence Bassini watching for the first time.

But Phil Parkinson’s side could not mark his arrival by prolonging their Championship status.

Villa had the best chances in the first half but were not at their most clinical and were still deadlocked at the break.

John McGinn went closest to putting the visitors in front only to have a 15th-minute header cleared off the line by debutant Harry Brockbank.

McGinn unleashed a powerful left-foot shot that Ben Alnwick did well to push away for a corner.

A fizzing low cross from Grealish set up another opportunity but Anwar El Ghazi could not convert the chance as he lunged for the ball at the back post.

The home side’s hopes of an upset win were not helped by losing experienced campaigners David Wheater and Gary O’Neil to injury and they were replaced by Mark Beevers and Josh Magennis.

Despite their problems, Wanderers still produced a couple of moments of quality to worry the West Midlands outfit.

Keeper Jed Steer got down smartly to push aside Clayton Donaldson’s right-foot effort while Will Buckley had a shot blocked by Axel Tuanzebe.

But Villa were much better in the second period and took the lead within 90 seconds of the re-start.

Abraham produced a brilliant cross from the Villa right and Grealish ran into the area unmarked to head home from close range.

With the deadlock broken Villa poured forward looking to double their advantage and only keeper Alnwick stood between Wanderers and a heavier defeat.

He pushed away an attempt by El Ghazi after 50 minutes and then produced an even better stop to deny Grealish.

Then it was Tyrone Mings’ turn to test Alnwick’s agility before Villa did get the goal their superiority deserved after 57 minutes.

Grealish looked to have run up a blind alley but he managed to flick the ball back into the path of Abraham who bravely bundled it over the line.

In doing so the Chelsea loanee suffered a suspected shoulder problem and took no further part in the game.

Abraham’s exit may be a worry for Villa but they kept pressing with substitute Keinan Davis causing problems.

When Wanderers did stem the tide Joe Williams fired wide from 20 yards but relegation was soon confirmed three games before the end of the season.