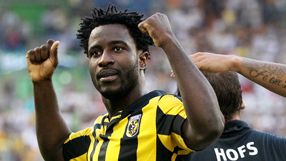 The Ivory Coast international, who hit a hat-trick in Saturday's 3-3 draw against Heerenveen, was close to a move to the West Midlands in the summer before the move broke down.

But the in-form Bony could still leave when the transfer window re-opens in January.

"I know that clubs follow me," said the striker. "But as long as nobody is officially reported at Vitesse, I can say little about my future.

"The club knows that I am open to a departure, but there must be serious interest for me."