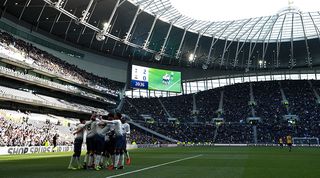 Finally, approximately 8,354 days after it was supposed to open, the Tottenham Hotspur Stadium will host its first Premier League game when Tottenham welcome Crystal Palace on Wednesday night.

Naturally, it looks bloody lovely – stadium designers Populous have happily tooted it as the "best stadium in the world" (though they would say that, wouldn't they?). It will also house 2,000 more fans than their rivals' home across north London – good, you might think, but too many to be petty for FFT's tastes.

Anyhow: today it’s your job to name the qualifying grounds which could feasibly host a party for the inhabitants of... *Googles* ... Truro?

There are 48 stadiums which can hold at least 20,000 people – including Spurs' new gaff – and we’re giving you 12 minutes to get as many of them as you can. Once you’re done, tell us your scores @FourFourTwo and we’ll add you to our daily Twitter leaderboard if you make the cut.

QUIZ! Can you name every club to finish in the Premier League top six?