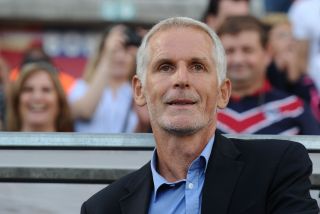 Bordeaux had gone ahead at the Stade de Gerland through Ludovic Obraniak's 62nd-minute strike, and their position was made more favourable when Alexandre Lacazette received a second yellow five minutes later.

But Lyon snatched a point thanks to Jimmy Briand's stoppage-time strike.

And while Gillot praised the efforts of his side throughout the match, he admitted his disappointment at their failure to take advantage of their one-man advantage.

"(It is) clearly two points lost in the circumstances," he said.

"We were 11 against 10, we had a big opportunity to bring the score to 2-0 and we failed to take it late in the game.

"With Lyon's final attack, we have not managed to clear the ball when we had the opportunity.

"So we take a point each. It's frustrating but we do not remove the efforts of the players over the 90 minutes.

"To move up the table we have to win matches. We had the opportunity against Lyon, as we did against Reims."

The result leaves Bordeaux 15th in the Ligue 1 standings with 11 points from 10 matches.

They continue their campaign when they welcome Montpellier to the Stade Jacques Chaban-Delmas on Sunday.