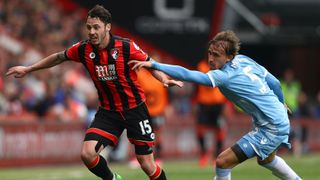 Stoke City and Mame Biram Diouf ended lengthy goal droughts but could only earn a point in a 2-2 Premier League draw at Bournemouth, who were fortunate not to have Harry Arter sent off.

A Lys Mousset own goal had the visitors in front by the break at the Vitality Stadium, Eddie Howe's men levelling against the run of play through Junior Stanislas in the 62nd minute.

Diouf's scrappy 73rd-minute finish, his first Premier League goal for 12 months, looked set to be the winner, only for a late Ryan Shawcross own goal from Max Gradel's header and Joshua King's touch forcing the spoils to be shared.

The result leaves the Cherries 10th, while Mark Hughes' side are a point worse off in 13th spot.

Bournemouth have another home game coming up against Burnley in the penultimate round of the league campaign next Saturday, while Stoke play host to Arsenal on the same day.

It took until the 22nd minute for a clear sight of goal to arrive, Adam Smith striking the post after good work by King and Stanislas down the right for Bournemouth.

The hosts were lucky to still have 11 men on the pitch when Arter was inexplicably only shown a yellow card for a wild lunge on Joe Allen, who fortunately escaped unscathed.

Stoke took the lead in the 33rd minute with their first away goal since January, the unfortunate Mousset inadvertently directing Marko Arnautovic's corner into the back of the Cherries' net for an own goal on his first Premier League start.

2 - The last two players to score an own goal on their first PL start have been Bournemouth players (Tyrone Mings and Lys Mousset). Blunder. May 6, 2017

Stoke should have doubled their lead a minute before the hour mark, Xherdan Shaqiri heading Allen's cross over the bar from close range.

They were punished for that wastefulness three minutes later, Stanislas sliding a good finish through the legs of Jack Butland after Smith broke down the right and supplied a dangerous ball across the face of goal.

Diouf replied by stabbing home from inside the six-yard box after Simon Francis failed to clear Geoff Cameron's awkward scooped cross, which bounced off the head of Shaqiri and into the path of the Potters' rusty marksman.

The visitors thought they had done enough to win it, but another dynamic burst down the right flank by Smith ended with Gradel's header and a King touch finding the back of the net thanks to Shawcross, rendering concerns over the offside flag redundant and forcing Stoke to settle for a point.