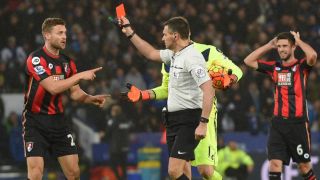 AFC Bournemouth boss Eddie Howe is convinced that Simon Francis' sending off against Leicester City was the wrong decision.

The defender appeared to get a touch on the ball as he challenged Jamie Vardy in the second half of his side's 0-0 Premier League draw, but referee Andre Marriner awarded the hosts a penalty and dismissed Francis.

Riyad Mahrez missed from the spot, though, with goalkeeper Artur Boruc diving to his left to make the save and Howe believes justice was done.

"I didn't think it was a foul from my angle, he definitely touched the ball," Howe said to Sky Sports.

"It was a great recovery tackle. It is not a foul, a penalty or a sending off. It had a huge bearing on the game.

"The referee was on the other side so there is no criticism from me but it was one of the tackles of the season from Simon Francis. A fantastic recovery against Jamie Vardy.

"We won't appeal the red card as I think it is a one-game ban and the FA Cup is coming up so there is probably no point. If it was a three-game ban then 100 per cent we would appeal."

Howe feels the game was very much in the balance prior to the red card, but praised his players' resilience to hold on for a point that means they have only lost once in their last eight Premier League outings.

He added: "It was a very even game before that point, a high tempo game and very high quality. It was there for the taking at 0-0 but the sending off was a total change.

"We had some great chances in the first half but when we went down to 10 men we showed character and it is a great point for us.

"Artur Boruc made an excellent save and kept the penalty out and we then had to adjust and took a massive point. It is a great result for us.

"After that moment we restricted them to half chances – it was a really good defensive display.

"I always say to the players this year that you have to respect every point in the Premier League."

Bournemouth are back in action when they are away to Championship side Birmingham City in the FA Cup next weekend.