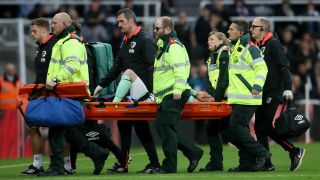 Adam Smith is set for three months out after Bournemouth discovered his knee injury was less severe than first feared.

The versatile defender went down holding his right knee after feigning to take a free-kick against Newcastle United earlier this month in a bizarre incident, with Smith subsequently stretchered from the pitch following a lengthy stoppage.

But concerns that the Cherries man would miss the remainder of the Premier League season have proven premature.

Smith has undergone surgery on torn cartilage but is now pencilled in for a return in mid-February.

A club statement on Monday read: "Bournemouth defender Adam Smith will be sidelined for up to three months by a knee injury sustained earlier this month.

"The full-back was stretchered off midway through the first half of the Cherries' Premier League defeat at Newcastle United.

"However, following extensive medical assessment, Smith's injury is not as bad as first feared, and on Saturday the 27-year-old underwent a procedure to repair a cartilage tear in his right knee."