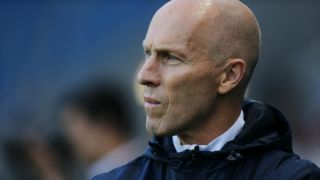 New Swansea City boss Bob Bradley wants to stamp his personality on the club in the same way Alex Ferguson did at Manchester United.

The former United States and Egypt manager has replaced the sacked Francesco Guidolin at the Liberty Stadium to become the first American to take charge of a Premier League team.

Bradley has been influenced by a number of trips to observe Ferguson when he was at the helm of United and wants to create a good impression with Swansea.

"I have always talked about when I was the U.S. national team coach, what it was like when I'd go to Carrington [where United train]," he said to NBC.

"What always struck me was how with all the great players and all the success, how Sir Alex's personality was all over every part of the club.

"He knew everyone's name and how he would joke with people in the kitchen.

"People sometimes from the outside have opinions of me but if anybody took the time to talk to equipment men and women I've worked with, medical stuff, assistant coaches, behind-the-scenes it has always been important to me to understand to make sure that every one of those people knows how important they are."

Bradley's appointment at Swansea was an important milestone for American managers, but he understands that does not matter to the club's supporters.

He added: "This point is very important. I know that this part of the story is important for the game in the United States.

"It has always been a battle for coaches and players to earn respect.

"That's never been the reason that I've done things but I've always understood that's part of the responsibility. But, that story doesn't mean one thing here.

"The only thing that matters here, like I said, you have people who love Swansea City football club. People who live and breathe for the club.

"I've never called myself and an 'American manager' I'm just trying to be the best manager I can."

Bradley's first match at the helm of Swansea sees his side face an away match against Arsenal on October 15.