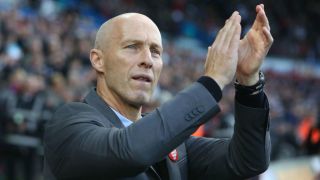 Bradley was looking for his first victory since taking charge at the Liberty Stadium earlier this month on Saturday, but had to settle for a share of the spoils despite looking the more likely to snatch three points during a much-improved second-half showing.

The American made three changes to his back four for the visit of Walter Mazzarri's men and believes defensive solidity was central to his team's performance.

"The second half was strong and we came out right from the beginning looking for a goal," he told BBC Sport. "It didn't happen but there are a lot of positives.

"It was important to get a clean sheet and the play from our centre-halves was solid as [Troy] Deeney and [Odion] Ighalo are difficult to play against. This is a step we can build on.

"Alfie impressed and it is not a surprise when you see him day in, day out. He is strong, good in the air and I am very happy with him.

"I think the team we picked made sense, we had a solid game but we are disappointed. It is a home match so we want three points, but you see the chances we are creating and we can feel good and try to move in the right direction.

"There is disappointment for sure, but a shared feeling of an all-round good effort."

After a drab first half of few opportunities, Mike van der Hoorn and Gylfi Sigurdsson came closest to settling the match, the latter striking the left-hand post from the edge of the box late on.