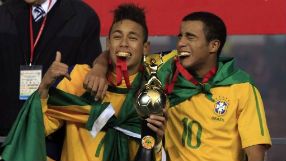 With Ronaldinho seemingly out of favour with new coach Mano Menezes and Alexandre Pato and Nilmar injured, the spotlight fell on 19-year-old Neymar, making his third appearance, 21-year-old debutant Leandro Damiao and 18-year-old Lucas, who also won his first cap when he came off the bench for the final 20 minutes.

None of them disappointed as Brazil overwhelmed Scotland in a 2-0 win where a 6-0 scoreline would not have flattered them.

Neymar and Lucas ran riot in last month's South American under-20 championship, with the former scoring nine goals and the latter four, while Leandro Damiao's 13 goals for Internacional made an irresistible case for a call-up.

All three showed enough of their talents on Sunday to suggest they could be a key trio when Brazil host the World Cup in 2014, desperate to make amends for their meek quarter-final exit at the hands of Netherlands last year.

Leandro Damiao provides an option not often used by the Brazilians as he is great in the air and, already tall, has a prodigious leap. He grazed the bar with an early header from a corner and was a regular target for his side's deep crosses.

Lucas had a short window to make an impact but managed to do so with two superb slaloming runs reminiscent of Lionel Messi.

But it was Neymar, reportedly a transfer target for Chelsea, who stole the show.

With a 10cm Mohican haircut, lime green and purple patent boots and tricky footwork he was an obvious target for the Scotland fans but their jeers were further fuelled by his theatrical response every time he was tackled.

With his tiny frame and his white socks pulled up above his knees he looked like a schoolboy who had accidentally wandered on to the seniors' pitch.

But he proved he was there on merit three minutes before halftime when he collected a pass from Andre Santos and, with calmness and precision, stroked the ball into the corner.

He had scored on his Brazil debut against the United States last year and duly made it three goals in three games with a 77th-minute penalty after another dummy led to Charlie Adam tripping him in the box.

"When you have new strikers, especially one of them playing for the first time, it's a risk but the team played well and that gave them the security to play their game and it was a good start for them," Menezes said.

"What we saw today confirmed what we'd seen in the under-20 team. The injuries accelerated their introduction but we don't want to do everything at once.

"Brazilian football has a lot of players you can bring in and expect a good performance but it was still a surprise (how well they did) given their lack of experience."

Menezes said he would be disappointed for the home fans if Neymar were to move to the Premier League but that it would probably be good for the player.

"His talent isn't going to disappear and that would give him more strength and allow him to escape markers better. It would be g