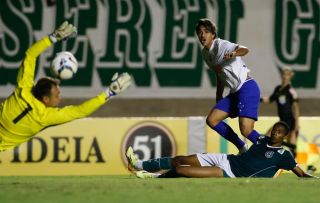 Defending champions Cruzeiro accounted for Goias 1-0 at the Estadio Serra Dourada on Sunday.

Bolivian midfielder Marcelo Moreno was on target for Cruzeiro, who earned their third consecutive win and made it nine games without defeat in the league.

After being pegged back into their own half during the opening stages, Cruzeiro made the breakthrough against the run of play with Moreno driving between two defenders and firing the ball into the far corner.

Marcelo Oliveira's Cruzeiro have collected 39 points from 17 rounds to be seven clear of Sao Paulo, who surged into second position at the expense of Internacional and Corinthians.

Internacional suffered a 1-0 loss at sixth-placed Atletico Mineiro on Saturday after Diego Tardelli struck eight minutes from the end.

Hernan Barcos' brace helped Luiz Felipe Scolari's Gremio, who are seventh in the table, to a 2-1 victory over Corinthians on Sunday.

Those defeats not only saw Cruzeiro move clear at the summit, but they opened the door for in-form Sao Paulo.

Sao Paulo edged Santos 2-1 in a dramatic finish on Sunday.

Ganso continued his goal-scoring form with a 23rd-minute opener against his former side - executing a spectacular volley outside the six-yard box.

Santos restored parity with four minutes remaining after Gabriel converted a spot-kick but just as the visitors seemingly earned a share of the spoils, Alexandre Pato scrambled the ball home two minutes later.

The result extended Sao Paulo's winning streak to four matches, while they surpassed Internacional and Corinthians by a point in the standings.

Fluminense are within touching distance of the duo after routing Sport Recife 4-0 on Sunday.

Former Brazil international striker Fred was the hero for the home side, scoring twice to help snap a run of back-to-back losses.

Fred played in Cicero for the game's opener in the 35th minute, before he scored a goal of his own - sending a powerful header past Recife goalkeeper Magrao with two minutes remaining in the first half.

Dario Conca made it 3-0 just five minutes into the second half after his audacious free-kick from an acute angle went through the legs of the keeper.

Fred capped the dominant performance with another headed goal 10 minutes from time.

In other results, two goals in the space of four minutes from Lucas Mugni and Eduardo inspired Flamengo to a 2-0 win at Criciuma - the club's fourth successive victory.

Meanwhile, Atletico PR and Bahia played out a scoreless draw.