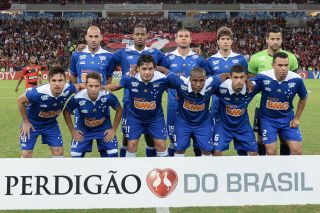 The Belo Horizonte-based club moved 16 points clear of second-placed Atletico Paranaense, who lost 2-1 to Criciuma to hand the 2013 Brazilian championship to Cruzeiro.

Willian started Cruzeiro's win on Wednesday with a goal eight minutes before half-time, running onto Dagoberto's through-ball to finish past Vitoria goalkeeper Wilson.

Cruzeiro were confirmed as champions during the break as Atletico PR's match finished in Criciuma but the new title-holders suffered a blow just after half-time when Dinei converted for Vitoria in the 51st minute.

But the visitors responded in the 71st minute, pulling Vitoria's defence apart as Dagoberto teed up Baptista, while Goulart's smart finish from inside the box 10 minutes later completed Cruzeiro's 23rd win of the campaign.

Cruzeiro moved to 74 points with the win in Salvador to claim their first championship in 10 years, while Atletico PR remain on 58 in second position.

In Criciuma, the home side led 2-0 at half-time thanks to Fabio Ferreira's sixth-minute strike and Wellington Paulista's penalty just before the half-hour mark and although Atletico PR fought back after the break through Paulo Baier's goal, the visitors were unable to win and stay in the hunt for the title.

Gremio (57 points) sit third in the final Copa Libertadores qualifying spot after a 1-0 triumph over Vasco da Gama, while Goias (56) remain in contention for the continental tournament after overcoming Ponte Preta 2-0.

Last season's champions Fluminense improved their chances of survival with a 2-0 win against cellar-dwellers Nautico.

Fluminense entered the match having not won in nine league games but goals either side of half-time to Wagner and Samuel saw the Rio de Janeiro-based club move out of the relegation zone on games won.

Dorival Junior's Fluminense side moved to 16th with 39 points and 10 wins, one spot out of the relegation zone and ahead of Bahia (39 points, nine wins).

In other results, Santos thumped Bahia 3-0, Corinthians won 1-0 away to Coritiba, Sao Paulo triumphed 2-0 over Flamengo, Atletico Mineiro trumped Internacional 2-1, while Botafogo and Portuguesa played out a scoreless draw.