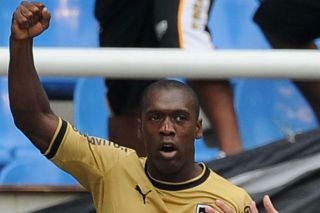 Wins to Cruzeiro and Coritiba would have seen them leapfrog Botafogo but both failed to gather the three points available.

A superb long-range effort from Vitinho got Botafogo off to the perfect start in the 10th minute at the Estadio Jornalista Mario Filho but the game turned on its head on 33 minutes.

Internacional striker Ignacio Scocco scored twice in the same minute; the first a deft free-kick from outside the area and the second strike brilliantly created by Andres D'Alessandro's defence splitting pass.

Down 2-1 at half-time, it took a wise head in Dutch veteran Clarence Seedorf to restore parity for Botafogo, dispatching his spot-kick in the 65th minute before Vitinho scored another goal ten minutes later to put the home side in the lead.

But Internacional refused to go down without a fight and defender Fabricio had the last say, netting the equaliser on 94 minutes.

Cruzeiro had a nightmare match as they lost 3-1 at Gremio despite having all the early possession and chances.

Everton Ribeiro had the opportunity to give Cruzeiro the lead but fluffed his penalty in the 34th minute before things got worse with the sending off of midfielder Souza only three minutes later.

A pair of goals within three second-half minutes through Werley and Hernan Barcos established an advantage for Gremio but Nilton gave Cruzeiro hope as he pulled one back on 67 minutes.

But Kleber snuffed out the away side's chance with a strike in the 73rd minute, lifting Gremio to fourth-position in the standings.

A last-ditch equaliser saved Coritiba from a humiliating home loss against lowly Portuguesa, who played a whole half with ten men in a 1-1 draw.

Defender Moises Moura was given two yellow cards in the space of three first-half minutes to make the job seemingly impossible for Portuguesa.

Against the run of play, Portuguesa somehow found the opener on 59 minutes through Gilberto but were heartbroken as striker Bill salvaged a point for Coritiba in the 95th minute.

In the other results, Criciuma comfortably accounted for Nautico 3-0, Atletico Mineiro won 2-0 against Bahia, Santos and Vasco da Gama shared a 1-1 draw and Vitoria triumphed 3-1 over Ponte Preta.

Goias drew 1-1 with Flamengo, Sao Paulo and Atletico PR were deadlocked 1-1 while Fluminense and Corinthians fought out a goalless draw.