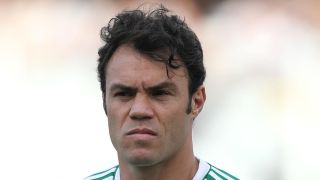 Coritiba captain Kleber has been slapped with a 15-game ban for spitting at and striking Bahia defender Edson.

The incidents occurred during the Campeonato Brasileiro match at the Couto Pereira on June 15 and the suspension is expected to keep the striker out of action until September.

Kleber hit Edson in the face with a swinging left arm in the first half and was shown a red card when the pair clashed again in the second period and he appeared to spit at the Bahia man.

Edson was also dismissed for his retaliation and he has been hit with a six-match suspension by Brazil's Superior Tribunal of Sporting Justice (STJD).

Coritiba have asked for Kleber's ban to be suspended while they appeal.