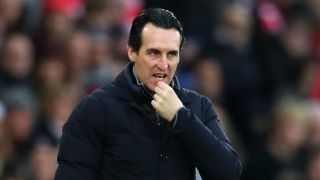 The Football Association (FA) has charged Arsenal head coach Unai Emery with improper conduct after he kicked a bottle during his side's Premier League game at Brighton and Hove Albion.

Emery let his frustration boil over on the touchline in the 1-1 Boxing Day draw and kicked out at a bottle, which then went into the Brighton fans.

The Arsenal boss appeared to apologise straight away and again said sorry for the incident at a post-match news conference.

But the FA has charged Emery regardless, announcing on Thursday that the Spaniard has until January 2 to respond.

Arsenal manager Unai Emery has been charged following the game against Brighton yesterday [26 December 2018]. It is alleged his action of kicking a water bottle during the fixture amounts to improper conduct. He has until 6pm on 2 January 2019 to respond to the charge. December 27, 2018

Emery addressed the incident again when he spoke to the media ahead of Saturday's trip to Premier League leaders Liverpool.

"There is not another communication. I repeat today my apologies for my individual action but I kick the bottle because it is near me, but not because it is my intention."