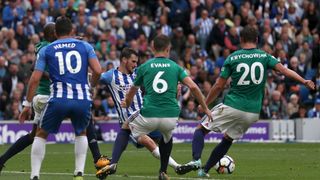 Pascal Gross was the star of the show, scoring the Seagulls' first goal since the club returned to the top flight for the first time in 34 years in the first half before adding a second just after the break.

Gross then turned provider for striker Tomer Hemed, who beat his marker to head home midway through the second half.

James Morrison set up a tense final 10 minutes by firing home, but the home defence stood firm to claim a precious three points.

Brighton had only recorded six shots on target prior to this game, and will now look to use this as a springboard to climb further up the table.

West Brom, however, will hope this defeat does not derail what had been a hugely positive start to the campaign, but boss Tony Pulis will know his side have to improve significantly after what was a strangely out-of-sorts performance.

One positive for Pulis was the return of Jonny Evans. Evans was back in the Albion starting line-up after his mooted move to Manchester City failed to materialise to form part of a back-line that had only conceded one goal in their opening three Premier League games.

After a cagey opening, the home side had the ball in the net in the 13th minute. Solly March's long-range shot was horribly fumbled by Ben Foster into the path of Shane Duffy, but the Irishman had strayed into an offside position. It was the second disallowed goal in a week for the defender, after he had one ruled out for the Republic of Ireland against Serbia on Tuesday.

The visitors had to wait until midway through the half for their first sight of goal as Gareth Barry's fierce drive was deflected over by his own player.

Dale Stephens then flashed a shot over the crossbar from distance when he should really have tested Foster before Barry's crisp volley from outside the box was well pushed over by Mat Ryan.

The breakthrough came on the stroke of half-time as Gross pulled down March's looping cross and composed himself to bundle the ball into the bottom corner via a significant deflection.

The half-time break did nothing to halt Gross' momentum as just two minutes into the second half he pushed forward into acres of space outside the West Brom box and drilled a shot into the bottom corner past a despairing Foster.

The home side were rampant at this point and came close to a third just before the hour mark when Duffy's close-range header was just about kept out by a nervy looking Foster.

Brighton did not have to wait long to get third, though, and again Gross was in the thick of it. His whipped cross from the left was met by Hemed at the near post, whose deft header crept in via the post.

The visitors had offered nothing going forward in the second period, but set up an interesting finale through Morrison's goal in the 76th minute. The Scotland midfielder had the freedom of the Brighton box to volley in from Oliver Burke's headed knockdown, despite Duffy's desperate attempts to keep the ball out on the line.