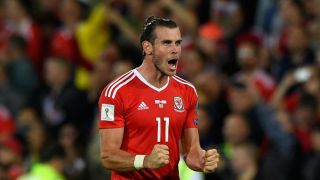 Bale's hat-trick in Thursday's 6-0 dismantling of the host nation in the China Cup gave Ryan Giggs a perfect start to life as Wales manager.

It also meant the 28-year-old Real Madrid star surpassed Ian Rush's previous best mark of 28 goals for his country as he secured the match ball.

"It's amazing," Bale told BBC One Wales, before explaining it was a particularly significant day for him to reach the landmark.

"On my daughter's birthday too, so happy birthday to her – it's disappointing I can't be there with her," he said.

"It is great individually to get the record but the team is always the most important thing."

Asked how breaking Rush's record ranked in a career where his honours include LaLiga, the Copa del Rey and three Champions Leagues, Bale replied: "It’s right up there, a major honour and a massive achievement.

"I never dreamed of it as a boy, being a record-breaker for Wales, and it’s one of the best things I've achieved in my career."

On a dominant performance, where Burnley's Sam Vokes helped himself to a brace and youngster Harry Wilson opened his international account, Bale added: "I suppose it felt a little bit different because everyone wants to impress the new manager.

"There are certain things he wants us to do differently."

Wales will face the winner of the other semi-final between Czech Republic and Uruguay in Monday's final.