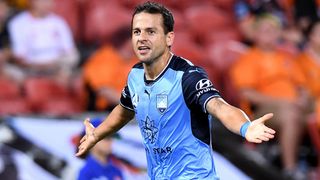 Bobo scored his 15th goal of the A-League season as Sydney FC claimed a 3-0 win away to Brisbane Roar on Monday.

The 32-year-old continued his spectacular form with the opener in the first half at Suncorp Stadium, before Adrian Mierzejewski and substitute David Carney made the points safe.

Bobo took his tally to 15 goals in as many games and nine in his last five with a poacher's finish in the 18th minute, tapping home at the far post after Milos Ninkovic had drilled the ball back across the box from the left.

Fahid Ben Khalfallah came close to an equaliser before the break but Mierzejewski made Sydney's lead more comfortable five minutes into the second half with a curling strike from the edge of the penalty area.

Alex Wilkinson made a brilliant clearance near his own goal line to deny the home side a lifeline and Sydney duly struck the knockout blow four minutes from time, with Carney prodding the ball home after Bobo had been denied a second by some last-ditch defending.

The result sends the leaders 11 points clear of Newcastle Jets in second, having played a game more, while Bobo is now only one goal away from equalling Marc Janko's club record of 16 in a single season.

33 - Adrian Mierzejewski and Bobô have scored or assisted 33 goals in the this season. No other team has scored more than 32 goals. Dazzlers. January 8, 2018