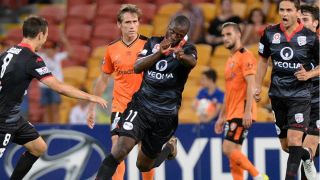 Adelaide hit the front after 19 minutes when Pablo Sanchez looked to prod home Craig Goodwin's low left-wing cross at the near post – Michel Theo's save ricocheting into defender Corey Brown for the ball to trickle over the line.

Henrique Silva brought Brisbane level in the 50th minute after winning a contentious penalty from Isaias, making the chances of a humbling along the lines of last week's 4-0 defeat at Melbourne Victory appear remote.

But Djite was on target from a spot-kick of his own following Jack Hingert's mid-air shove on Dylan McGowan and the forward collected Tarek Elrich's first-time throughball to fire past Theo in the 67th minute.

Elrich was the provider once more as Adelaide crowned a memorable triumph in style in stoppage time – the full-back embarking on a mazy run in before teeing up Marcelo Carrusca to curl a wonderful 25-yard strike into the top corner.