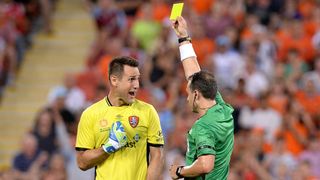 Inter-state rivals Brisbane Roar and Sydney FC played out a 1-1 draw in the A-League, which briefly descended into farce when a player seemed to receive a second yellow card and not the requisite red.

Table-toppers Sydney failed to win for the first time in seven games this season as Suncorp Stadium was treated to an absorbing encounter between Queensland and New South Wales opponents.

Josh Brillante had brilliantly put the visitors ahead in the 13th minute, crashing in his first senior professional goal in style from 25 yards after tenacious work from Bobo had helped open up the chance.

Brisbane goalkeeper Michael Theo was made to work hard to keep them in it, twice bailing out sloppy backpasses and the Roar got back on level terms before the break as Thomas Kristensen half-volleyed home from 18 yards.

Though goal chances dried up somewhat after the break, the second half was memorable for referee Alan Milliner failing to dismiss Rhyan Grant after showing him a yellow card for the second time when he bundled over Jamie MacLaren as he bore down on the Sydney goal.

Replays suggested that Milliner may not have shown Grant the card earlier in the period after he clashed with an opponent, but Brisbane coach John Aloisi was an apoplectic presence on the touchline for the game's remaining 20 minutes.