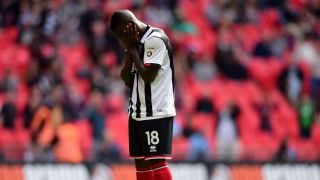 Bristol Rovers secured an immediate return to the Football League with a 5-3 penalty shootout victory over Grimsby Town at Wembley.

Sunday's Conference promotion final - played out in front of a record fifth-tier crowd of more than 47,000 - ended 1-1 after extra time, with Ellis Harrison having drawn Rovers level in the first half following birthday boy Lenell John-Lewis' early opener.

Former Grimsby goalkeeper Steve Mildenhall was brought off the bench for Rovers just for the spot-kicks, though it was Jon-Paul Pittman's skied effort that proved crucial.

The forward fired his effort well over the crossbar and Lee Mansell - promoted from the Conference with Torquay United in 2009 - ended up with the honour of netting the decisive penalty.

Rovers were relegated on the final day last season and missed out on the title in the last match of this campaign, but will be back in the Football League next term.

For Grimsby, though, it will be a sixth year in non-league football after a third consecutive failure in the play-offs.