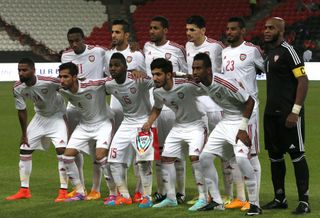 The teams were scheduled to meet on the Gold Coast on Saturday, only for the clash to be called off at the last minute.

In a statement, the UAE FA said Kuwait had agreed to the behind-closed-doors friendly not to be recorded or open to the media and public.

But Kuwait wanted to film the clash, leading to its cancellation with players on their way out onto the pitch.

"The Kuwaiti delegation has unfortunately declined to adhere to the previous agreement under which an official letter was sent to the Kuwaiti FA on December 15, and clearly stipulated that the match should not be telecast, recorded or open for the media and the public," the UAE FA statement read.

"But, the Kuwaitis insisted on filming the game and this was against the purposes of the technical staff of the UAE national team.

"This difference could have been overcame, particularly that the Kuwaitis have submitted their start list to the Australian officials of the match and the players lined up in the entry gate on their way down to the pitch.

"At this stage, the Kuwaiti team's manager escalated the situation and threatened that the match could be cancelled unless their requirement is responded to.

"And since the Kuwaiti last minute demand conflicts with the objectives of the UAE national team, the persons in-charge have rejected the Kuwaiti request and the match was cancelled in the process."

Pictures show sprinklers turned on and hitting Kuwait players and police at the venue.

Kuwait open the Asian Cup against tournament hosts Australia on Friday, while the UAE meet Qatar on January 11.